Note: Please "click" on the subheading listed above to view a list of letters for that year. Then click on the individual date to view the letter. 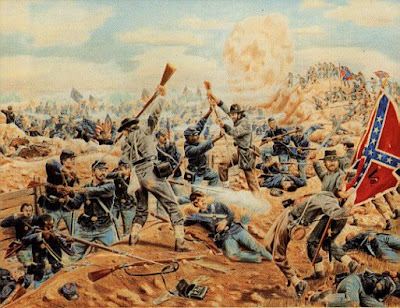 William Beynon Phillips was born in 1841 in Maestege, a small village in the county of Glamorganshire in South Wales, not far from the present day city of Port Talbot. His father, John Phillips, was a carpenter by trade -- an occupation that apparently took him wherever the work demanded as his five children were born in three different villages between 1841 and 1854. His mother, known only as Ann, was married previously and had at least one child by her first marriage named David Williams. Both of William's parents were born in the County of Carmarthenshire; John in the upland village of Llanboidy and Ann in the seaside village of Pembrey.

In addition to his half brother David, William had three younger sisters. Ann, the oldest, was born in 1847. Catherine was born in 1849, and Margaret in 1854. A brother named John was born in 1850 but did not live to see his tenth birthday. Sometime after William and Ann were born, the family moved a few miles to the village of Margam where Catherine was born, and then finally settled about 1850 in the industrialized valley town of Cwmavon where the river Avon flows between green hills varying in height from 1,200 to 1,400 feet. Most of the residents worked in the coal, iron, or copper industries but William's father was able to find employment as a sawyer while his mother operated a grocery store.

Beside the obvious employment opportunities, William's parents may have been drawn to the populous city of Cwmavon so that William could attend better schools. It is obvious from his later writing that William was well educated, quite knowledgeable in the works of English authors and poets, and endowed with a remarkable political awareness. Perhaps he was encouraged by his mother who seemed herself to be politically astute and even participated in public debates on the social issues of the day. Her conviction that slavery was a moral wrong would later put her at odds with most of her countrymen who sided with the Confederacy during the American Civil War.

For reasons that we'll never understand, William left his mother land in 1861 to begin a new life with other Welsh immigrants who had previously settled in the Lackawanna River valley of eastern Pennsylvania. His new home was established in the hillside village of Hyde Park, overlooking the city of Scranton, where he found many former emigrants from Wales who befriended him immediately and accepted him as a brother. Like many of his neighbors, William may have initially accepted employment with the Lackawanna Coal Company but this was not a job that could satisfy the restless spirit of adventure in a wide-eyed young lad of twenty.

By 1862, William had become acquainted with the Thomas Richards family of nearby Carbondale. Thomas and his wife Margaret had emigrated from Wales in 1833 and were long-established residents in the area. Their daughter Annie, born 1845, would capture the interest of William and draw him ever nearer to the extensive Richards family circle. Some three years after their first meeting, William and Annie would marry, but the intervening years would be turbulent and filled with melancholy separation. Enraptured with a sense of duty to his new country of choice, William enlisted with other young men from the Scranton area to fill the ranks of Schooley's Battery in August 1862. This unit would later lose its independent command and become attached to the 2nd Pennsylvania Heavy Artillery as Company M.

The letters which follow are an insider's view of the history of the aforementioned regiment from 1862 to 1864 and the "Provisional Heavies" -- in particular -- which was detached as a separate unit from April until August 1864. Sprinkled among and complementing the letters composed by William Phillips are a few written by his good friend and future brother-in-law, William Davis, who also served in the same unit. The letters end ten days prior to the Battle of the Crater where William was taken prisoner with several other captives and sent south to a Confederate prison camp to wait out the end of the war.

For many years I held on to the letters that I intend to share on this blog. The letters are special to me. That is to be expected. The question that remained was, will anyone else care? Through the encourgement from others who have read them I decided that yes, others will care about these letters.

Having decided to share these war letters the next question became how to do it. The obvious choice was to put them on the world wide web. Through some "Googling" and a bit of serendipity I connected with Bill Griffing. Bill shares my passion for the Civil War and is an experienced webmaster as well. With his help we published "The Civil War Letters of William Beynon Phillips" as a link on his marvelous website, "Private Letters-The Correspondence of James S. Griffing & J. Augusta Goodrich". After being on the website for a period of time Bill needed the bandspace for his own material and we jointly agreed that the letters might best be presented on a blog, so that is what I have done.

The text that accompanies these letters was written by Mr. Griffing. He also did most of the transcriptions . I have done some editing and will add commentary of my own along the way, but most of the research and writing is his.

Lastly, it is my hope that these letters will inspire others to share their comments and personal knowledge relative to the people, places and events depicted. Welcome aboard!